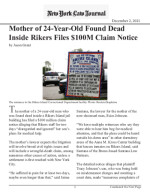 The mother of a 24-year-old man who was found dead inside a Rikers Island jail building has filed a $100 million claim notice alleging that Rikers staff for two days “disregarded and ignored” her son’s pleas for medical help.
The mother’s lawyer expects the litigation will involve broad civil rights issues and will include a wrongful-death claim, among numerous other causes of action, unless a settlement is first reached with New York City.
“He suffered...
Read Full Article 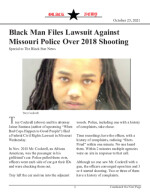 In Nov. 2018 Mr. Cockrell, an African American, was the passenger in his girlfriend’s car. Police pulled them over, officers went each side of car got their IDs and were checking them out.
Trey left the car and ran into the adjacent woods. Police, including one with a history of complaints, take...
Read Full Article 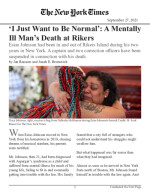 ‘I Just Want to Be Normal’: A Mentally Ill Man’s Death at Rikers

When Esias Johnson moved to New York from his hometown in 2019, chasing dreams of musical stardom, his parents were terrified.
Mr. Johnson, then 21, had been diagnosed with Asperger’s syndrome as a child and suffered from mental illness for much of his young life, failing to fit in and eventually getting into trouble with the law. His family feared that a city full of strangers who could not understand his struggles might swallow him.
But what happened was far worse than what...
Read Full Article 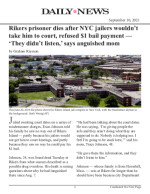 Jailed awaiting court dates on a series of misdemeanor charges, Esias Johnson told his family he saw no way out of Rikers Island — partly because his jailers would not get him to court hearings, and partly because they saw no way he could pay his $1 bail.
Johnson, 24, was found dead Tuesday at Rikers from what sources described as a possible drug overdose. His death is raising questions about why he had languished there since Aug. 7.
“He had been talking about the court...
Read Full Article

Derek Chauvin trial: What we know so far

Attorneys will continue to question potential jurors until they've seated 12, with two alternates. Former Minneapolis police officer Derek Chauvin faces murder and manslaughter charges in floyd's death. NewsNOW from FOX's Rain Augustine speaks with Civil Rights attorney, Jaime Santana on what we know so far, and what we can expect as juror selection continues.

If you didn’t know this, you should: Police are allowed to lie during interrogations to elicit confessions from suspects. The Supreme Court has...

Read More >
January 1, 2022
Is Your Car’s Data Vulnerable to a Warrantless Search?

The Fourth Amendment of the U.S. Constitution declares, “The right of the people to be secure in their persons, houses, papers, and effects,...

“Suicide by cop” is a term law enforcement uses for situations where a person, looking to end his life, provokes police into shooting...

After a three-year investigation, the District Attorney of Fulton County Georgia has returned indictments against six present and former county jail...

The family of a young Black man senselessly killed in police custody in 2019 will receive a $15 million settlement, while the cops and paramedics...