‘I Just Want to Be Normal’: A Mentally Ill Man’s Death at Rikers 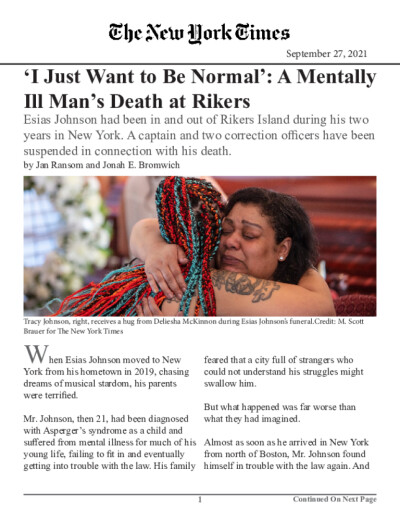 When Esias Johnson moved to New York from his hometown in 2019, chasing dreams of musical stardom, his parents were terrified.

Mr. Johnson, then 21, had been diagnosed with Asperger’s syndrome as a child and suffered from mental illness for much of his young life, failing to fit in and eventually getting into trouble with the law. His family feared that a city full of strangers who could not understand his struggles might swallow him.

But what happened was far worse than what they had imagined.

Almost as soon as he arrived in New York from north of Boston, Mr. Johnson found himself in trouble with the law again. And as his mental illness worsened, manifesting in increasingly frightening ways, Mr. Johnson was arrested repeatedly and taken, again and again, to Rikers Island.

In the two years after his arrival in New York, Mr. Johnson faced at least six criminal complaints, but was never convicted of a crime. Bouncing in and out of jail, he occasionally received perfunctory counseling and little else, according to court records and Mr. Johnson’s family.

But in August, when Mr. Johnson arrived at Rikers for the last time, the city’s notorious jail complex had descended into chaos. A month later, he was dead.

The last years of Mr. Johnson’s life reflect the criminal justice system’s long struggle to grapple effectively with mental illness. But his death is emblematic of a more recent problem: a cascading crisis at Rikers, where a severe staffing emergency has contributed to inhumane conditions, inadequate medical and mental health care and a collapse of the basic functions of the entire correctional system.

Last week, a federal monitor overseeing the jail asked a judge to intervene, while New York lawmakers asked President Biden to get involved.

The cause of Mr. Johnson’s death on Sept. 7 remains under investigation. He had spent the days before begging for medical attention — pleas that were ignored, according to the detainee who found him dead. Two correction officers and a captain have been suspended in connection with Mr. Johnson’s death.

His death was the 10th in the city’s jail system this year. Two more people in city custody have died since, making 2021 the deadliest year in New York City’s jails since 2015 and stoking skepticism about the city’s ability to protect the health and safety of the roughly 6,000 people incarcerated in its jails. Several of the deaths at Rikers have been ruled suicides; in other cases, like Mr. Johnson’s, the cause has not been determined.

Mr. Johnson was arrested in Queens in August when the police said he slapped a man’s backside before chasing him into a bank and, wielding a syringe, threatened to infect him with H.I.V. and hepatitis C.

The charges could eventually have led to bail, and to a short jail sentence or time in a mental health facility if he was convicted. But his last incarceration was different. In addition to the charges in New York, there was an active warrant for his arrest in New Jersey. He was ordered held at Rikers at a time when the jail was ill equipped to keep him safe.

Mr. Johnson’s death at age 24, his family and advocates for incarcerated people have said, was completely avoidable.

“Coming onto Rikers should not be a death sentence,” said his family’s lawyer, Jaime Santana.

He wanted to be ‘normal’

As a child, Esias Johnson “had a different outlook on life,” his father, Jerome Johnson, said in an interview. His brothers were drawn to sports, Mr. Johnson said, while Esias, whom the family called “Izzy,” preferred picking daisies.

He grew up in Haverhill, Mass., a small city 35 miles north of Boston; his mother worked as a nurse, and his father made a living as a truck driver.

The family was rooted in the church, and Esias, as a child, spent each morning looking on as his mother, Tracy Johnson, danced to worship music. Inspired, he found a passion for music too, captivated by pop stars who made their names before he was born: Michael Jackson, Cher, Prince and Whitney Houston.

His problems became evident early on. He slathered the bathroom in green gel and tried to bake cookies without turning the oven on, his mother said.

“It was really difficult,” Ms. Johnson said. “We couldn’t figure out what was going on.”

Eventually, the Johnsons learned he had Asperger’s syndrome, a neurological disorder on the autism spectrum, and mental health issues. He went to a specialized school, but by 11th grade was frustrated and threatened to seek emancipation if he could not attend the mainstream high school in town.

“‘I just want to be normal,’” Ms. Johnson recalled her son saying.

Around the same time, church officials learned that he was gay, his parents said. He was asked to step down from a youth leadership role, a decision, his parents say had profound consequences.

“It changed the direction of his life, it changed the way he felt about God and the people of God,” Mr. Johnson said. “He didn’t feel comfortable reaching out to people anymore. It took something very important from him.”

After Mr. Johnson graduated from high school, his parents said that he struggled to find his way. He landed in some trouble, accused of driving in a stolen vehicle and later of driving without a license, local news reports from the time show.

Soon, Mr. Johnson decided he was moving to New York to pursue a music career. At his parents’ encouragement, he enrolled in programs and counseling while there, they said.

In and out of jail

In New York, Mr. Johnson found himself on the wrong side of the law almost immediately, and during his three years in the city he was repeatedly accused of making violent threats.

After one arrest in 2019, when he was accused of threatening to bomb Marymount Manhattan College, his lawyer told the court he had “serious mental health issues.” He was arrested twice more before being sent to jail in early 2020, staying nearly a year before posting bail last November.

Johnson was one of many people living with mental illness who ended up at Rikers Island. According to a 2016 Mayor’s Management Report, more than 40 percent of the people held at Rikers had been diagnosed with a mental health condition,

His inability to get meaningful care or treatment was also typical. Rikers has had a history of mistreating and even abusing detainees with mental illness. And in recent months, as Rikers continued to spiral out of control, many incarcerated people have said they have missed appointments with mental health physicians because of a shortage in officer staffing, or have not had access to psychiatric medication.

After his earlier stints at Rikers, Ms. Johnson said her son started living at the Fairfield Inn in Queens, where a city-run program housed recently released people who were homeless. There, she said, he had access to social services for people with mental illness.

In March, he was accused of stealing a man’s cellphone, then threatening him with a syringe that he said would give him H.I.V. He was again sent to jail, and posted bail in the middle of May this year.

The following month, Mr. Johnson was accused of texting a New Jersey man to verify the man’s address, then adding, “I’ll kill everyone there.” A warrant was issued for his arrest.

Finally, in early August, Mr. Johnson was arrested for the last time, after slapping and chasing the man in Queens, according to a police report.

Ms. Johnson said she learned that her son had been jailed again when, realizing more than a week had gone by without a call from him, she checked the Department of Correction’s website and learned that he had been detained.

She said many of her son’s legal troubles stemmed from his relationships with the men he was seeing at the time. She said he had been rejected a lot.

“He wanted to be loved like he loved everybody else, but the world didn’t offer him that,” Mr. Johnson said of his son. “To the world he was weird and strange.”

When Mr. Johnson returned to Rikers Island in August, after bouncing between freedom and incarceration for the better part of two years, the jail was deep in a crisis that had been building since the beginning of the pandemic.

Covid-19 had drained the facility of able-bodied correction officers. Morale among those still working at the jails dropped, and as they were called upon to work double and even triple shifts, more and more officers began to call in sick, or simply failed to show up. Those who did come were stretched thin and unresponsive to problems in the jails, the federal monitor overseeing the jails found.

When Mr. Johnson was finally able to call his mother, he told her he had not been feeling well, and said that correction officers were not taking him to court, she said. Ms. Johnson said she had also tried to pay his $1 bail on the charges from Queens. But paying the nominal dollar bail would not have led to his release — Mr. Johnson was being held on the warrant in New Jersey, where he probably would have been taken only after his charges in New York were resolved.

Still, Ms. Johnson said, correction officers failed to take her son to a video hearing in mid-August. Her son told her he had missed three appointments.

“I don’t know why they’re not bringing me,” Mr. Johnson told his mother over the phone. “I should have been out of here by now.”

Correction officials disputed that account, and said Mr. Johnson’s only missed court date had been canceled by the court and rescheduled for the day after his death.

“Our thoughts and condolences remain with Mr. Johnson’s family, and we want to assure them that this was not a case of D.O.C. failing to bring their son to court,” said Jason Kersten, a department spokesman.

Allen Chey King, 51, a detainee who said he found Mr. Johnson unresponsive in the dorm they shared in a mental health unit, said Mr. Johnson had begged staff for medical attention in the days leading up to his death. Mr. Johnson had complained of insomnia and constipation, Mr. King said in a recent phone interview.

Mr. Santana, the family’s lawyer, said Mr. Johnson’s cries for help echoed out beyond his dorm.

Tracy Johnson said she believed that her son would be alive if someone at the jail had listened to him.

“If you would have just helped, he would have been home right now,” Ms. Johnson said.