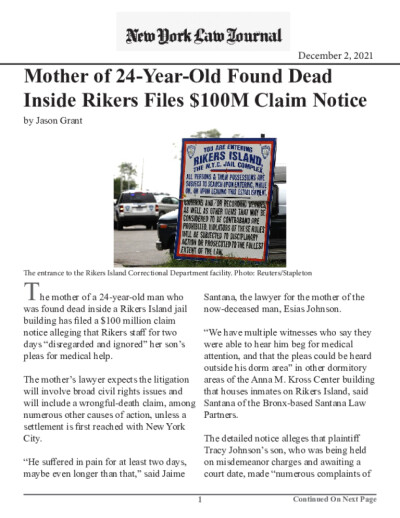 The mother of a 24-year-old man who was found dead inside a Rikers Island jail building has filed a $100 million claim notice alleging that Rikers staff for two days “disregarded and ignored” her son’s pleas for medical help.

The mother’s lawyer expects the litigation will involve broad civil rights issues and will include a wrongful-death claim, among numerous other causes of action, unless a settlement is first reached with New York City.

“He suffered in pain for at least two days, maybe even longer than that,” said Jaime Santana, the lawyer for the mother of the now-deceased man, Esias Johnson.

“We have multiple witnesses who say they were able to hear him beg for medical attention, and that the pleas could be heard outside his dorm area” in other dormitory areas of the Anna M. Kross Center building that houses inmates on Rikers Island, said Santana of the Bronx-based Santana Law Partners.

The detailed notice alleges that plaintiff Tracy Johnson’s son, who was being held on misdemeanor charges and awaiting a court date, made “numerous complaints of pain to his body, including but not limited to his stomach area, for at least two days prior to” him being found dead Sept. 7.

The New York Law Department, which was served with the claim notice Nov. 22, could not be reached for comment. Representatives at Rikers Island jail could not be immediately reached.

In a phone interview, Santana said he believes Esias Johnson’s death is emblematic of wider-ranging staff neglect issues playing out throughout the sprawling Rikers Island complex, as the pandemic has intensified staffing shortages, creating a “chaotic” atmosphere in which inmates’ medical problems, safety and prescription-drug needs are shunted aside.

Santana said that he has considered launching a class action suit against the city and Rikers as conditions worsen and “excuses” are made.

According to news reports, there have been at least 12 inmate deaths in city jails this year, the most since 2016.

“We routinely represent claimants who are either currently inmates at Rikers Island or were inmates,” said Santana. “Esias Johnson’s death is indicative of the medical neglect and the deplorable conditions which inmates are currently facing, which the most part seem to go either unnoticed or ignored.”

“These inmates, whether innocent or guilty, should not be given a death sentence,” because they went to Rikers, he said.

The plaintiff is still awaiting both a cause-of-death ruling and a toxicology report on Esias Johnson, Santana said.

Johnson also alleged that Esias had told her for days or weeks that Rikers staff was not taking him to scheduled court dates.

According to a New York Times report, though, city correction officials have maintained Johnson missed only one court date that was canceled by the court and that had been rescheduled for Sept. 8.

The article also said that over the last couple of years, Esias Johnson had been subject to at least six criminal complaints, and had been in and out of city jails, but that he hadn’t been convicted of any crime. Santana could not confim that number of criminal complaints, but said of Esias Johnson’s death inside Rikers and the alleged circumstances surrounding it, “When you take into consideration the totality of circumstances involved in this case, and the fact that Esias was very young, you cannot put a price on Esias’ life.”